A few weeks ago Microsoft pushed out an update to Xbox One, enabling support for external storage via its USB 3.0 ports. It works as you would expect -- you plug in a disk, it gets formatted, and away you go. But you lose the ability to use that disk on other PCs and devices. Let's take a look at why.

Here's what an Xbox One-formatted disk looks like on a Windows PC via Disk Management:

Windows clearly has no idea what's going on here, which isn't surprising. The Not Initialized state here indicates the disk doesn't have the expected Master Boot Record (MBR) at the beginning (sector 0) of the disk.

Here's what the beginning of the disk looks like in a hex editor: 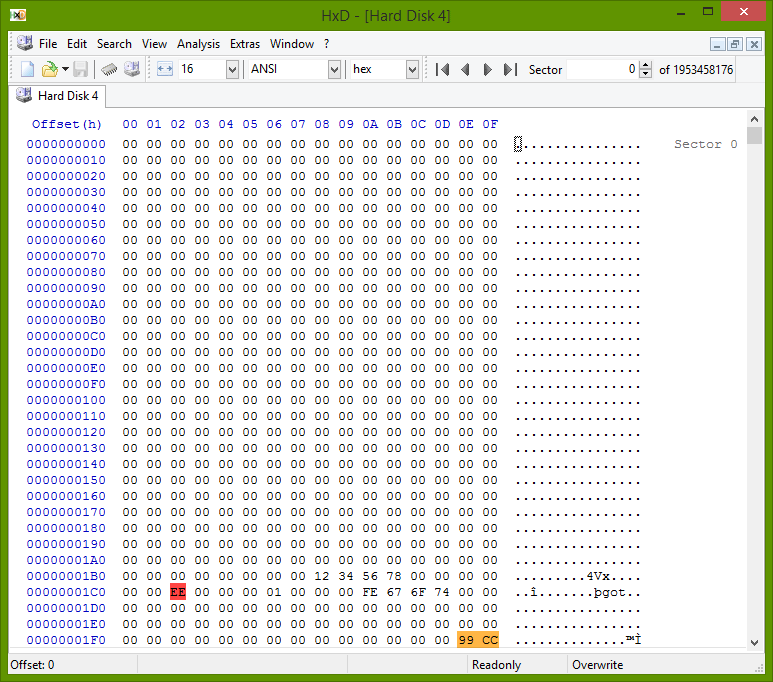 On a traditional disk, the first 446 bytes of this sector would contain bootstrap code used for boot purposes. The Xbox One isn't booting from the disk so this area is blanked out with the exception of some placeholder bytes near the end.

The bytes that follow represent various disk and partition parameters.

The EE byte sits in the partition type slot and is used by Microsoft to indicate a GUID Partition Table (GPT) partitioning scheme is in use. Windows should have no problem recognizing this.

The last two bytes of sector 0 signify what's called the boot signature -- an arbitrary but known marker to indicate that this sector represents a MBR structure and isn't just a bunch of random data. Windows (and most systems) expect these two bytes to be 55 AA (0xAA55). The Xbox One, however, opted for 99 CC (0xCC99). This is why Windows thinks the disk is uninitialized.

Overwriting the boot signature with the expected bytes and unplugging/replugging the drive results in a happier Disk Management tool.

And here's a view from File Explorer:

(That file with the GUID represents the Netflix app that I copied onto the disk.)

Presumably, you could write some code to swap the boot signature bytes to flip-flop between PC and Xbox One disk compatibility. But I'd be weary of relying on any data stored on this file system given Windows still thinks "there's a problem with this drive". I suspect, like FAT on Xbox 360, the NTFS filesystem structure was tweaked to meet the needs of Xbox One.

Maybe we should start calling this NTFSX.